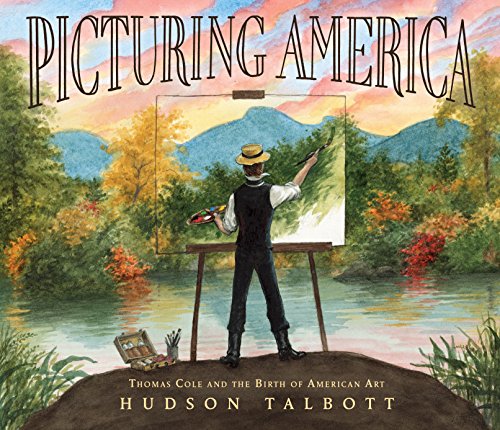 Críticas ""The painters of the Hudson River School were grandiose, romantic, dramatic and brilliantly colorful. They also helped define the nation, championing wild America to a population that often saw nature as a thing to be feared and tamed, not celebrated. They made art with a wow factor, which is why it's surprising that there are so few children's books about this country's first art movement or its painters. . . . Picturing America traces Cole's life and his interest in art and nature, starting with his birth in 1801 in England, where his family witnesses the ways in which the nascent Industrial Revolution despoils English cities. . . . Talbott illustrates the narrative with beautiful watercolors, imagining the landscape Cole would have seen, and he includes reproductions of more than a dozen of Cole's works. . . . Talbott ends on an upbeat note. Thanks in part to Cole's influence, by 'the 1870s large areas of pristine wilderness were being preserved from destruction, ' Talbott writes. 'They eventually became our national parks.'""--The Washington Post ""Few artists have been able to capture the magic and timeless beauty of the U.S. landscape better than Thomas Cole. . . . The book offers excellent reproductions of Cole's work: text, illustrations, and reproductions combine to trace the evolution of Cole's art and the progression of the Hudson River Movement, including its implications for modern art. Readers will fall in love with landscape in this captivating, inspiring picture book. A fine addition to art history collections.""--School Library Journal ""Talbott, who wrote about the same area in River of Dreams (2009), does a fine job of capturing an artist's life, while at the same time offering a history lesson on the natural beauty of the country, as well as an early push to protect the environment. Cole, instrumental in the formation of the Hudson River School, is shown here in light-hearted illustrations and in dramatic full-page paintings. Reproductions of his works appear on several pages. . . . Aided by the back matter, many intrigued readers will happily search out more.""--Booklist ""In visual vignettes rendered in mixed-media art, Talbott depicts Cole traveling on foot, sleeping in derelict conditions, and finding salvation through moments spent painting. . . . Talbott integrates images from Cole's oeuvre, including the four paintings from the Voyage of Life series.""--Publishers Weekly

""Talbott smoothly blends commentary on Cole's life with exploration of his art, briefly but cogently guiding the young audience through the social meaning embedded in such works as The Course of Empire and The Voyage of Life series. Eight of Cole's works are reproduced within the text (and credited in end matter), where they mingle easily among Talbott's own watercolor scenes.""--The Bulletin of the Center for Children's Books Reseña del editor This fascinating look at artist Thomas Cole's life takes readers from his humble beginnings to his development of a new painting style that became America's first formal art movement: the Hudson River school of painting.Thomas Cole was always looking for something new to draw. Born in England during the Industrial Revolution, he was fascinated by tales of the American countryside, and was ecstatic to move there in 1818. The life of an artist was difficult at first, however Thomas kept his dream alive by drawing constantly and seeking out other artists. But everything changed for him when he was given a ticket for a boat trip up the Hudson River to see the wilderness of the Catskill Mountains. The haunting beauty of the landscape sparked his imagination and would inspire him for the rest of his life. The majestic paintings that followed struck a chord with the public and drew other artists to follow in his footsteps, in the first art movement born in America. His landscape paintings also started a conversation on how to protect the country's wild beauty. Hudson Talbott takes readers on a unique journey as he depicts the immigrant artist falling in love with--and fighting to preserve--his new country. Ver Descripción del producto