British & Irish Lions on This Day: History, Facts & Figures from Every Day of the Year por Tim Evershed 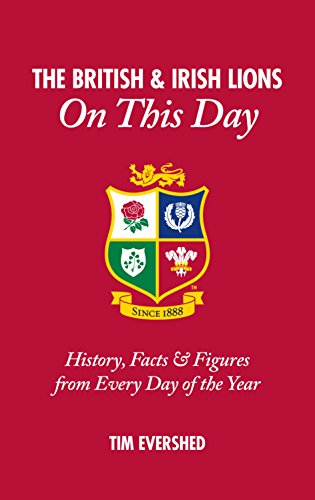 Tim Evershed con British & Irish Lions on This Day: History, Facts & Figures from Every Day of the Year

British & Irish Lions On This Day revisits the most magical and memorable moments from the Lions' distinguished history, mixing in a maelstrom of anecdotes and characters to produce an irresistibly dippable diary - with an entry for every day of the year. From tours, Tests and provincial matches to the exploits of the Lions players in the wider world of rugby and beyond, the names of the players that have represented the Lions reads like a Who's Who of British and Irish rugby union and despite the advent of professionalism and the World Cup many home players regard Lions selection as the highest accolade available to them. Cliff Morgan, John Dawes, Willie John McBride, Bill Beaumont, Finlay Calder and Martin Johnson are just some of the famous names that have led the Lions on tour. Meanwhile tries and goals have been provided by Vivian Jenkins, Ernest Hammett, Barry John, Gareth Edwards, Ollie Campbell, Alan Irvine and many, many more. This hardback book has 192 pages and measures: 19.3 x 12 x 1.8cm


Tim Evershed is a freelance journalist and author who lives and works in Nottingham. Tim covers sport for the national newspapers as well as a number of magazines and websites. He lives with his wife Hayley and two sons William and Joseph. British & Irish Lions On This Day is his second book.