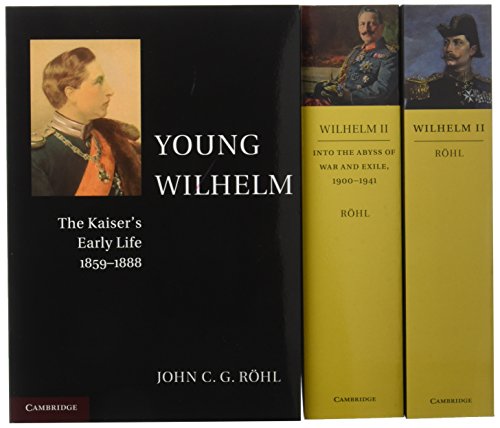 Reseña del editor Kaiser Wilhelm II (1859–1941) ruled Imperial Germany from his accession in 1888 to his enforced abdication in 1918 at the end of the First World War. These three acclaimed books provide the most detailed account ever written of his reign. In Volume 1, on the Kaiser's early life, John Röhl charts the bitter conflict between the handicapped prince and his liberal parents, and the utter failure of attempts to turn the young prince into a liberal Anglophile. Volume 2 shows how Wilhelm's thirst for glory, his overweening nationalism and militarism, and his passion for the navy provided the impetus for a breathtaking long-term goal: the transformation of the German Reich into the foremost power in the world. The final volume examines the mounting tensions caused by the Kaiser's policies at home and abroad, and reveals his central role in the origins of the First World War. Descripción del libro An acclaimed three-volume life of Kaiser Wilhelm II, who ruled Imperial Germany from 1888 to his enforced abdication at the end of 1918. The books chart the Kaiser's early life, his attempts to transform the German Reich into the foremost global power, and his central role in the origins of the Great War. Ver Descripción del producto